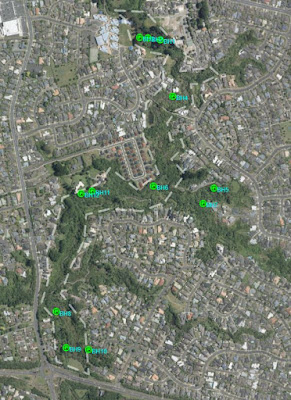 We completed the bat home installation project with Tim Newton of Green Footprint, the arborist, installing the last three, of a total of twelve, on Thursday 5th December. One was in a gum tree in the school yard of Rototuna Primary. Lots of classrooms came out to watch. The You Tube clip of bat activity in Sandford Park had been forwarded to the school, so many of the children were really excited to see the home go up.

We are very realistic, in that if we get one of the twelve occupied in the next few years, we will feel we have been successful.
For those interested this document of an overview of bats in New Zealand is linked to an interesting pdf
http://www.nzbats.org.nz/assets/files/NZ-Bats-An-Overview-vs-4.pdf

Posted by Mangaiti Gully Restoration at 1:39 PM No comments:

One of the problems of restoring a natural area in the city is the invasion of some domestic plants. The two major ones in Mangaiti Gully are cherry trees and palms.  Their seeds are primarily distributed by birds. In Mangaiti these are getting out of control. In fact, we would go so far as to say if we, as an organisation, were not hand weeding them out they would be so invasive that cherries and palms would dominate the flora in the gully within ten years.


There are possible solutions that our Trust are starting to look at; however, none of them are simple to implement.

Cherry Trees
In the meantime we do urge anyone that lives within a bird’s flying distance of the gully to remove any cherry tree that sets fruit. That is, that are not sterile. If you have the cherry to attract Tui I suggest a replacement would be either a Banksia integrifolia (available from our Trust) or a Kowhai. If it was a spring blossom you are after there are sterile varieties such as Pink Cloud, Prunus campanulate. 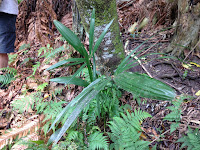 It is not clear if all three palm varieties that dominate our urban landscape are responsible for the invasive seedlings in the gully however, if you have palms and are able (not to high), the floret could be easily removed each spring to prevent the berries developing. 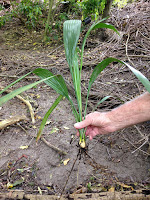 Posted by Mangaiti Gully Restoration at 1:37 PM No comments: 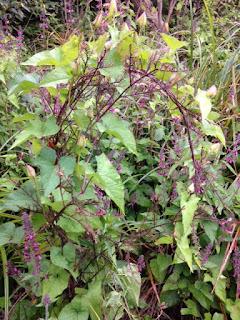 Weed vines (Honey suckle, Black Berry, Convolvulus) have a devastating effect on young trees. Not only do they smother them restricting their growth, but they also pull down the growing tip and, if left, cause disfiguration. Each spring and summer newly planted trees need to be “released”.  It is generally not necessary to weed the whole area but just to pull the weeds away from around the new planting until the growth of the plants (three to five years) are tall enough to shade out invasive weed growth.


Posted by Mangaiti Gully Restoration at 1:24 PM No comments:

Track and board walk pushing south 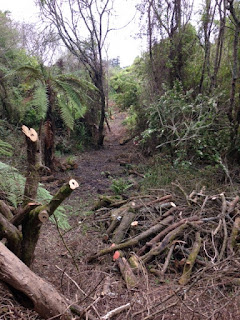 To give better access to the area south towards Sue’s flat we are clearing and extending the present track and board walk. We presently have a rough track cut along the lower gully slope but that is not suitable for wheelbarrows or for carting equipment along. This will give us easier access to several project areas that we are presently working on.
Posted by Mangaiti Gully Restoration at 1:22 PM No comments:

Track being cut up onto Haswell Place. 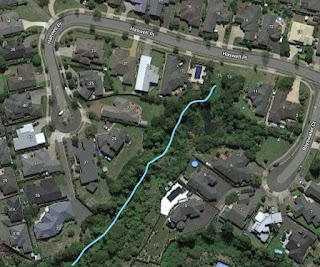 There is a high summer weed infestation in this section of the gully. These weeds set seed in autumn. Normally this would not be that much of a problem except that this gully has a high water flow during a rain event from a culvert that runs under Haswell Place. This washes weed seed downstream and is causing a reoccurring summer weed infestation along the length of the gully where the restoration is not yet grown enough to shade the summer weeds out.
We see the solution is to clear the perennial weeds (black berry and honey suckle) then plant to eventually shade out any summer weed growth. To do this we need access hence the building of the track.
Posted by Mangaiti Gully Restoration at 1:14 PM No comments: 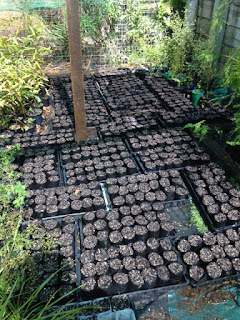 To support our “Planting for Kereru” programme 644 Nikau berries / seeds were sown into individual ¾ PB bags and another 300 in seed trays. According to a search on google they take about three months to start germinating so we should know our success, or otherwise, shortly.

Posted by Mangaiti Gully Restoration at 1:12 PM No comments:


This long-term programme is underway. It is based around the Miro tree because of its berries being so palatable to the Kereru.  First we identified existing Miro in the gully and GPS plotted them onto a map. Now we are following up by selectively planting Miro so that we fill in the gaps. This is being done over the entire thirty hectares of Mangaiti Gully. With the sum of what is already in the ground and what plants we have to go in will total more than forty.


In addition, around each Miro we are planting Tawa, Pigeon Wood and Nikau. The theory is that we will develop forty attractive feeding stations for Kereru within Mangaiti Gully. We do stress that this is a long-term project in that these trees take a considerable number of years to mature.

Posted by Mangaiti Gully Restoration at 12:37 PM No comments: